Snapchat IPO valuation: is it worth US$20bn?

Snapchat's IPO has been on the news block for some time. It is indeed one phenomenon of needs of Millenial's generation. Getting from 0 to 150m DAU in under 5 years is indeed very swiftly. Yet as even as public markets are at its all-time peak, let's look at fundamentals.

Below is my take on valuation. Key historical users metrics and financials with comparison among facebook, twitter and snapchat can be downloaded below.

Let's break it down:

However, when looking at quarter over quarter growth, we see an abrupt drop in last 2 quarters from 60-90% in 1H2016 to under 20% in 2H2016. Current quarter over quarter growth is actually very similar to facebook (facebook though has ca. 8x in DAU). At the time of facebook's IPO annualized q-o-q growth and y/y was fairly consistent in 25-40% range.

The chart below shows how Snapchat's usage differs by age groups. The young population is already quite saturated with reach over 70%, older population despite growing is by far of a similar reach. Based on growth of smartphone ownership and Snapchat usage I assume in 5 years NA audience would reach around DAU ca. 110m (more detailed in excel) 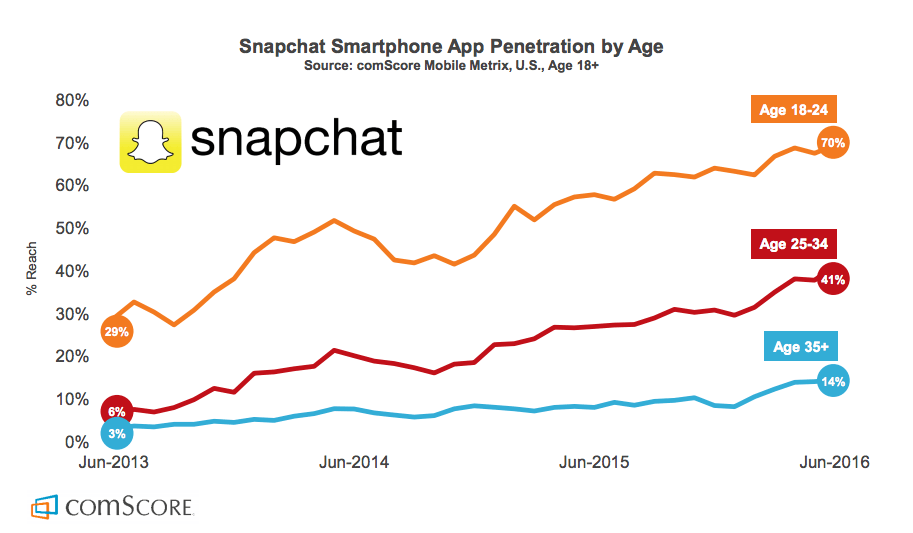 Also, google trends query of Snapchat show the search volumes are not growing last year. It doesn't tell us exactly that growth is zero but creates grounds to forecast even in optimistic scenario to maintain annualized growth at ca. 20% q-o-q going forward.

Reference: twitter search volumes decreased by half correlate with decline in q-o-q annualized growth from 40% in 2H2013 to negative by 2015Q3, in 2016 growth has stabilized.

To forecast revenue, let's look how well each geography monetizes.

Facebook since early days had an internationally monetizable audience, Europe was around of half of USA sales and ROW users generated around 10% of USA users. Twitter's international was about the same, ca. 10% of North America's per user.

Snapchat despite having very strong European user base monetizes it very poorly (<15% that of USA revenue per user). Rest of world users also generated less than 5% of that of USA & Canada.

For Snapchat improving monetization across all regions will be one of the key challenges. First signs do exist: European revenue per users grew from 5.5% of USA to 12.8% in last 5 quarters, but it is still far below compared to facebook.

Below is last twelve month (LTV) of quarterly revenue per User: DAU for in case of facebook and Snapchat, MAU in a case of twitter.

I forecasted Snapchat revenue ARPU per geo-based on previous growth dynamics that of facebook. Blended APRU per DAU [MAU] is shown below: 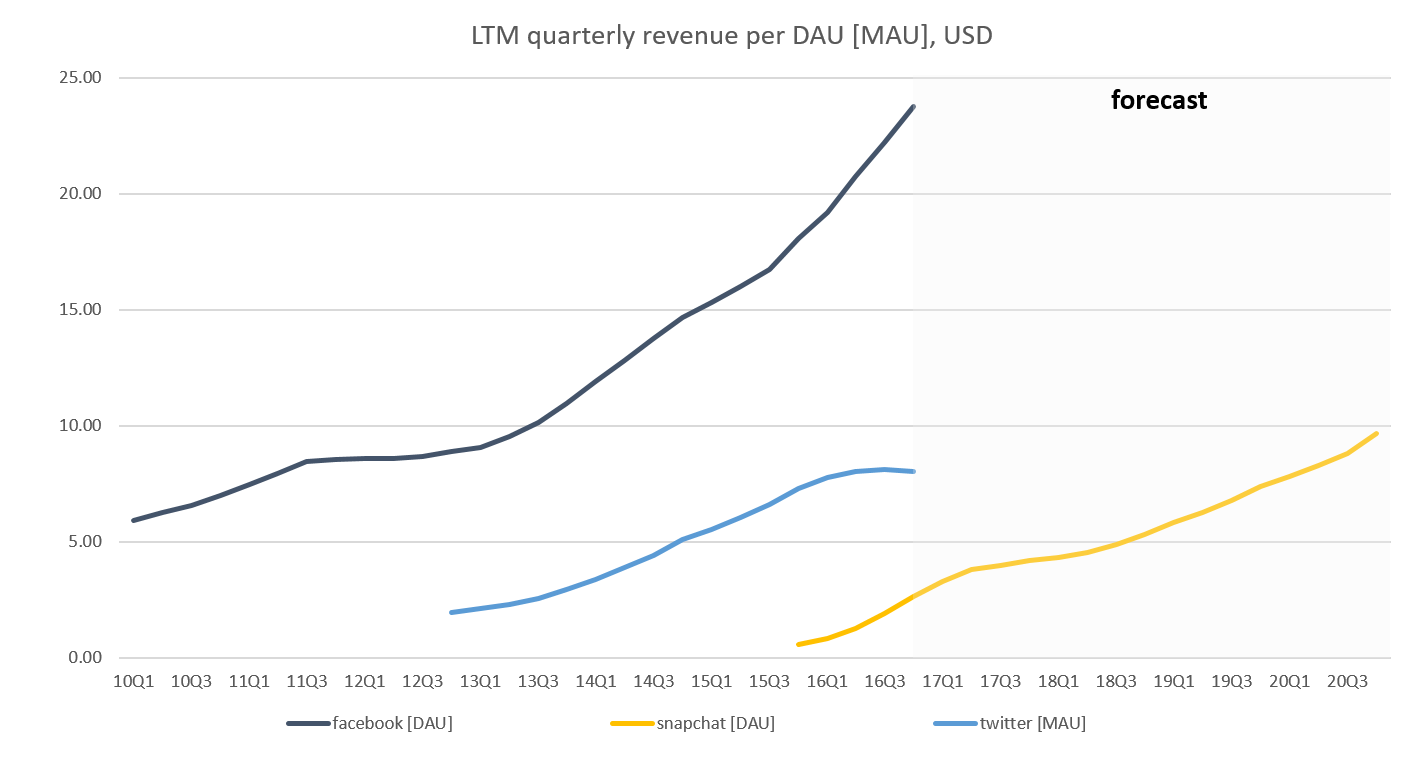 Forecast of APRU growth beyond 2020 was done conservatively, at 10% per annum. Twitter's dynamic demonstrates explicitly that scaling user monetization with only one format of communication is hard. Facebook, on the other hand, has many channels (from in-game purchases to desktop ads to mobile installs)

One key cost of any internet company is its cost of its infrastructure.

Up until consumption of videos became popular, running costs were relatively low (facebook always maintained its cogs < 25% since very early days). Twitter's infrastructure was always a bit more expensive, mainly due to the requirement to processes in real time high load of updates.

Snapchat, on the other hand, is heavily driven by video traffic, which is expensive to scale-up with low user ARPU, especially when a significant part of the user base is not monetized at all. The cost of sales became less than revenue only in 16Q3 with gross profit reaching 8% in last quarter.

One of the most optimistic assumptions going forward is snapchat's ability to reach gross margin by 2020 that of an average of twitter and facebook.

The increase in S&M in 2016 was 357%. This was primarily due to an increase in sales and marketing headcount of approximately 340%. 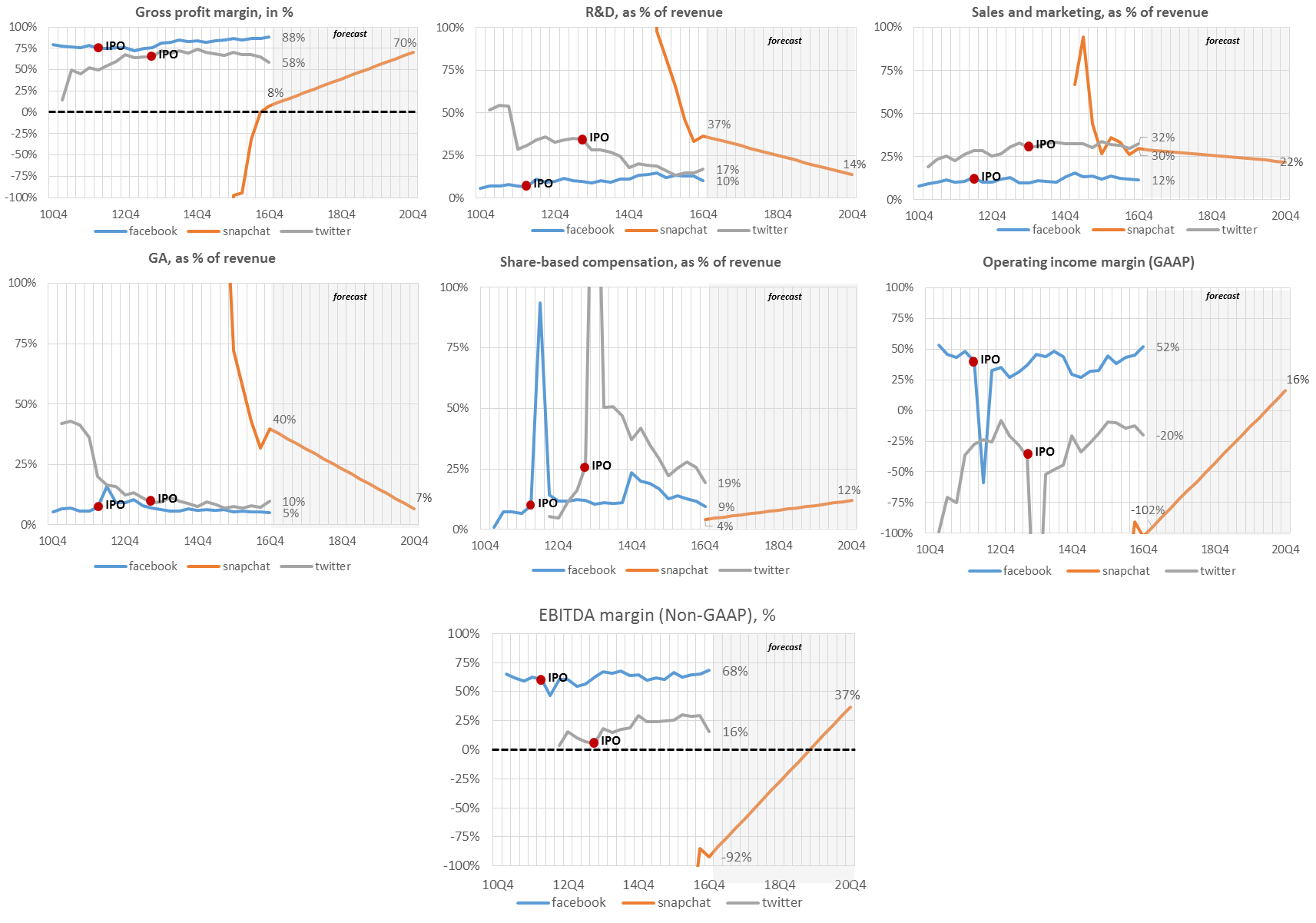 Key investments in IT companies are in own infrastructure to reduce OpEx, however, Snapchat signed 2 major deals with Amazon and Google Cloud to spend over 500m per annum on them. My take is that sales / CAPEX will be higher than facebooks and twitter at around 2.7x.

4. RISK AND COST OF CAPITAL

Currently, snapchat has almost US$1bn in cash with a present value of debt ca. US$310m due to operating leases or Net Debt at -US$0.7bn.

Based on inputs above, Terminal Cash Flow equates to US$1.2bn in 2027 or value of operating assets today at US$16bn (if you believe in long-term ERP of 4.5%, as it is quite sensitive to it).

Subtracting negative net debt of US$0.7bn while adding ca. US$3bn from IPO proceeds we get ca. US$19.7bn in equity value or US$19bn in equity of common stock (currently there are ca. US$700m outstanding and vested options) or US$15.25 per share.

So, the stock is priced in?

The answer to that question would be "yes" if you believe in optimistic aggressive assumptions highlighted above as well in management ability to execute on them.

What are the possible growth drivers to re-iterate a more positive outlook? 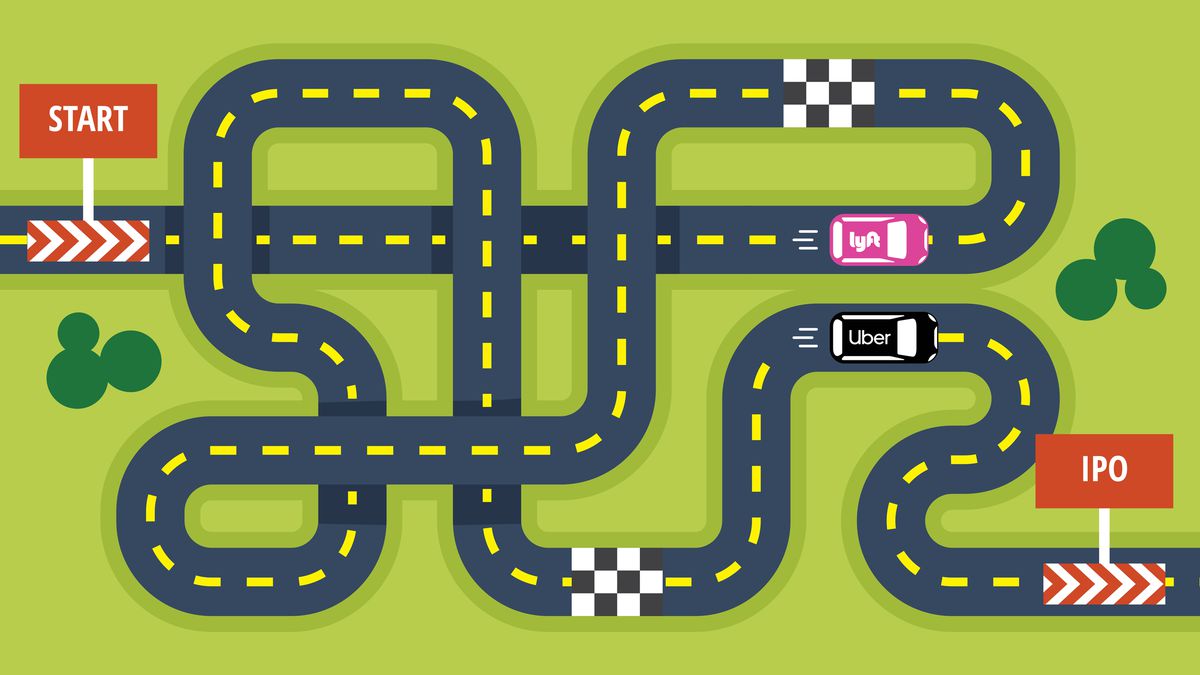